← more from
COP International
Get fresh music recommendations delivered to your inbox every Friday.
We've updated our Terms of Use. You can review the changes here. 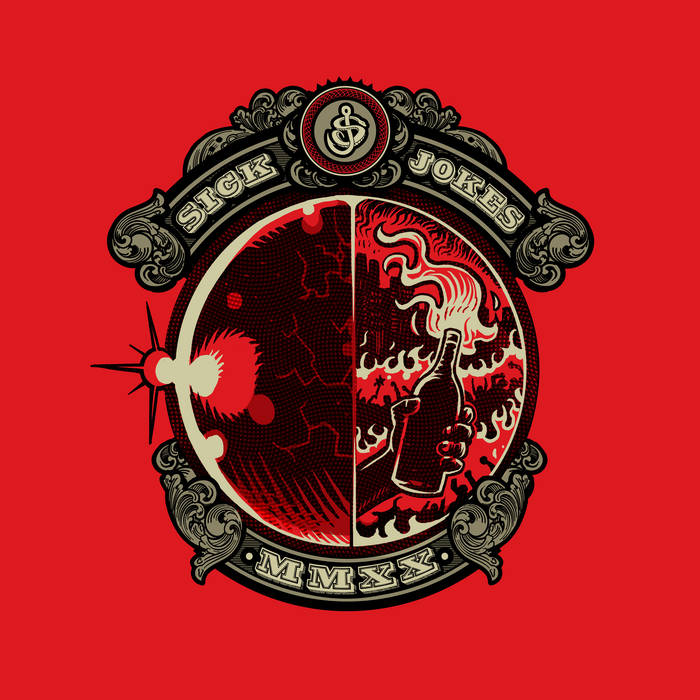 The world is a pyre, but nobody ever said the apocalypse shouldn’t be fun! Or have a great soundtrack. Which is precisely where Sick Jokes comes in with their appropriately titled debut EP MMXX (2020 in Roman Numerals, naturally) out today via industrial label COP International fueled with all the aggression, rage, and mania that have become the hallmarks of this year.

“The vision was to write some good, heavy industrial music again. It’s been a while. The times seem to need it,” says Michael Madill, guitarist/lyricist/sound designer behind the pop-industrial metal act, who co-produced the album with keyboardist Robert McCarroll. “Society in 2020 is full of anxiety and unease, and that makes us want to write anxious, uneasy music.”

Heavy, brooding, at times even a bit uplifting, the nine-track MMXX (four original songs, five remixes) is the collaborative effort of a band of old cohorts spanning the globe with Madill stationed in Normandy, France and keyboardist Robert McCarroll, drummer Kenny Wilson and dual vocalists Sean Haezebrouck and Plasmic spread out between Los Angeles, Detroit, and Austin.

Madill, McCarroll, Haezebrouck, and Wilson spent their formative days in a handful of industrial bands local to Detroit in the first half of the ‘90s (HAL, Noc Barrage, Batterie Acid), and found the zeitgeist of 2020 to be the spark to create some new material in the genre—this time around, joined by colorful L.A.-based singer Plasmic, a prolific producer in her own right.

The new material caught the ear of legendary producer John Fryer, whose Black Needle Noise project featured Haezebrouck on drums for a series of live shows in 2019. With the help of Fryer, the newly minted Sick Jokes honed in on four original songs and five additional remixes (one by Fryer himself).

Says COP International founder Christian Petke, “John [Fryer] called me up and said, ‘You have got to check these guys out. I really think we should have them on the label.’ I was sold after the first 8 measures. The guys gave Plasmic a solid 1990 cyberpunk backbone, but her energy and attitude pushed it straight into the 21st century. We have been waiting for angry music!”

MMXX represents an entirely virtual collaboration, recorded individually by each member in their own studios. The record was then edited by Madill in Normandy and mixed by Tony Hamera in Detroit. Along with John Fryer, remixes are by Scott Wexton (The Voodoo Organist), Kirill Slavin (EXT EST), Mike Propst (Various Reasons), and Justin Mysza, another alumnus of HAL. MMXX serves as both a time capsule of life in 2020 and as a salute to the genre.

Sick Jokes is an international collective of artists who create heavy electronic music.
Soundtrack for the Apocalypse. With guitars.

Bandcamp Daily  your guide to the world of Bandcamp

Alex Rita and Errol from Touching Bass feature in our special London edition of the Bandcamp Weekly.